WWII sketches of the men from the 857th Engineer Aviation Battalion

Karl R. Rittmann served in the Pacific theater during WWII.   His duties would include being a platoon commander, an adjutant, and later battalion historian with his engineer unit.   When the men where not busy building airstrips, fixing roads, or constructing bases Lt. Rittmann would sketch the troops. 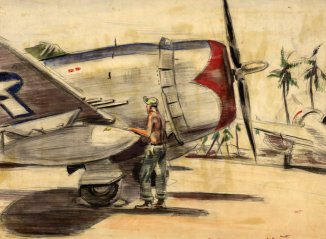 After the bombing of Pearl Harbor in December of 1941, Karl Rittmann, a senior at the Rhode Island School of Design, put his education on hold and enlisted in the Army.   Following Officers Training in Virginia, lieutenant Rittmann was assigned to the 857th Aviation Engineers and was off to the Pacific theater. 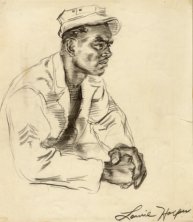 The following are excerpts from an article written by Karl Rittmann and published by the Providence Journal in January 1945 while he was stationed in New Guinea.

“We work under difficult conditions most of the time.   The jungle is often so thick that it’s like midnight under the trees, and yet when you cut down some of them the light pours in is literally blinding.   Sometimes I can’t draw because the light is too strong.

Our engineers have performed extraordinary feats in providing water where it is needed and in overcoming obstacles of all kinds.   Destroying pillboxes is one of their specialties.   Some of the pillboxes are so heavily made, with many layers of coconut logs, that hand grenades bounce off like tennis balls.   The engineers have to creep up and demolish them with TNT.”

The images on this page are some of the drawings Karl produced during his time in the Pacific.   Although the originals are not in the best condition, they still convey a strong impression of what life was like for this battalion.   Anyone having more information about any 857th Aviation Engineers or any of the troops pictured are welcome to send us an email.   See additional images below 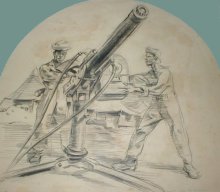 For information on the United States Military Engineers visit the Vets Home and the Army Engineers Assocation websites.